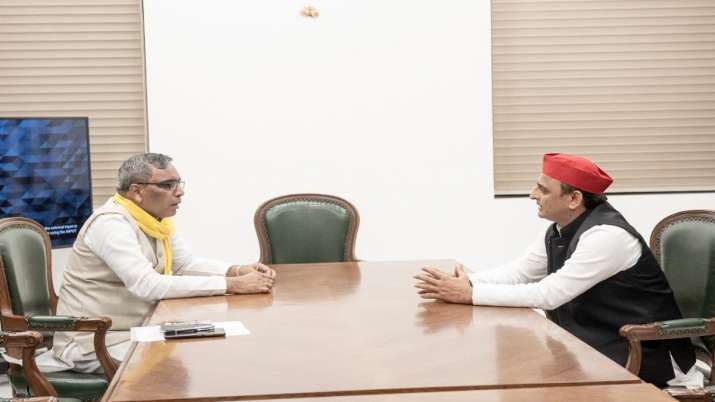 SP, SBSP alliance: Akhilesh Yadav-led Samajwadi Party and Om Prakash Rajbhar’s Suheldev Bharatiya Samaj Party will be contenting the Uttar Pradesh assembly election 2022 in alliance. The Samajwadi Party made the announcement regarding joining hands with Rajbhar’s political outfit in a tweet on Wednesday.

“The two parties will join hands to fight the battle of the deprived, the oppressed, the backward, the Dalits, women, farmers, youth and the weaker section to defeat the BJP. BJP will be routed in Uttar Pradesh,” the SP said in the tweet.

Rajbhar was a minister in Yogi Adityanath cabinet, however, the Uttar Pradesh Chief Minister had sacked him in 2019. Rajbhar later formed a coalition of 10 parties – Bhagidari Sankalp Morcha. The All India Majlis-e-Ittehadul Muslimeen (AIMIM) headed by Asaduddin Owaisi is also a part of the alliance.

While Akhilesh Yadav has already made it clear that his party will not enter into alliance with any bigger party, Rajbhar had been eager to join hands with Samajwadi Party.

“The public is angry with the BJP. If the Samajwadi Party comes forward, and ties up with smaller parties and regional parties, then the election results can change. If the SP ties up with the SBSP, then the BJP will not get even a single seat in Mau, Ballia, Ghazipur, Azamgarh, Jaunpur, Ambedkar Nagar and other districts. There will be fight (with the BJP) on only two seats in Varanasi,” Rajbhar had said recently.