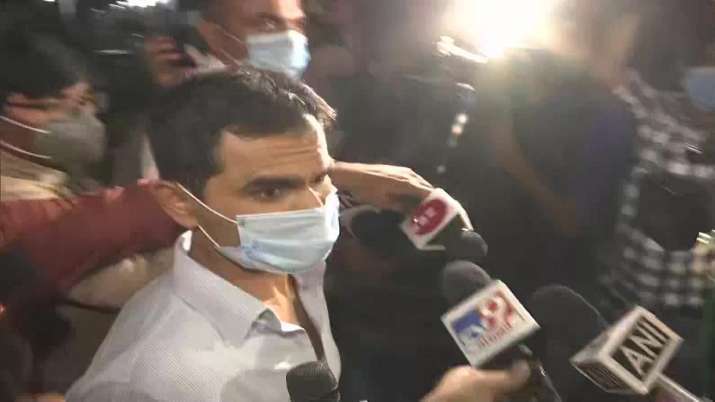 On being repeatedly asked whether he has been summoned to New Delhi, Wankhede said that he will answer everyone through legal means.

“I have not been summoned. I’ve come here for a different purpose. Allegations against me are baseless,” Sameer Wankhede said.

Earlier in the day, Sameer Wankhede and the NCB approached a special court in Mumbai against the allegations of extortion levelled against them in the cruise drugs seizure case.

Meanwhile, the NCB vigilance unit head DDG NR Gyaneshwar Singh said that the agency will initiate an inquiry into the allegations of extortion made by an independent witness in the cruise drug case.

Prabhakar Sail, the ‘independent witness’, in a statement to the media, claimed that Rs 25 crore was demanded by an official of the NCB and other persons, including absconding witness KP Gosavi, to let off Aryan Khan in the case.

Prabhakar told media persons that he had overheard Gosavi telling one Sam D’Souza over the phone, after Aryan Khan was brought to the NCB office following the October 2 raid, about a demand of Rs 25 crore and “to settle at Rs 18 crore as they have to give Rs eight crore to Sameer Wankhede”.

Singh said he will record the statements and analyze the evidence given by the witness, Prabhakar Sail, and submit a comprehensive report to the NCB. He said that certain facts have been reported through social media by the independent witness.

On being asked whether Wankhede will remain in his post as it can impact the inquiry, he said we will make a decision on the evidence found during the inquiry. “We are a professional agency and whenever we notice a thing to be enquired, we will do the inquiry”, he said.

The vigilance chief added that they would continue to fight the drug menace despite the personal attacks and accusations against the anti-drug trafficking body.

Wankhede has been summoned to the national capital by the NCB Director General to provide an explanation about the stunning allegations levelled by the cruiser ship raid’s ‘panch-witness’ Prabhakar Sail on Sunday. However, the agency has termed it as a routine meeting with the top brass.