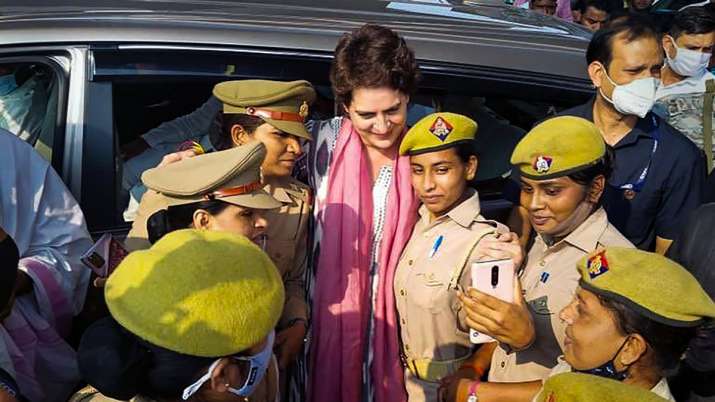 Congress General Secretary Priyanka Gandhi on Wednesday took a dig at the Yogi Adityanath government after reports of an alleged probe against female constables of the UP Police who got pictures clicked with her surfaced. After a photo of UP female constables clicking selfies with the Congress leader surfaced, there were several reports which suggested that the Yogi government is planning to initiate an inquiry against the cops.

The Congress leader, who was stopped by the Uttar Pradesh police in Lucknow from going to Agra to meet the family members of a man who died in police custody but was later allowed to proceed, also questioned if simply clicking pictures is a crime.

“The news says that Yogi ji got so upset with this picture that he wants to take action against these women policemen. If it is a crime to take pictures with me, then I should also be punished for it. It does not suit the government to spoil the career of these hardworking and loyal police personnel”, she tweeted along with the picture.

Meanwhile, Congress also claimed that the actions of the Uttar Pradesh government suggest that it is rattled with the growing popularity of party leader Priyanka Gandhi Vadra and said it was indicative of the things to come in the future.

Congress spokesperson Gourav Vallabh said that wherever Priyanka Gandhi goes to meet the people affected by violence or crime, the state government imposes Section 144 of the CrPC and stops her from visiting them. “What does this show? It shows that the Uttar Pradesh government has given up before Priyanka Gandhi and her popularity,” he said alleging that the BJP-led state government is now indulging in “petty things”.

He asked whether it was a crime or if it was against the law to stand with a person who has lost someone.

“This also shows the fear of the UP government and the fact that they have seen the things to come due to her exponentially growing popularity,” Vallabh claimed.

Police said the Congress general secretary was stopped at the Lucknow-Agra Expressway as the Agra district magistrate did not allow any political personality to go there following the man’s death.