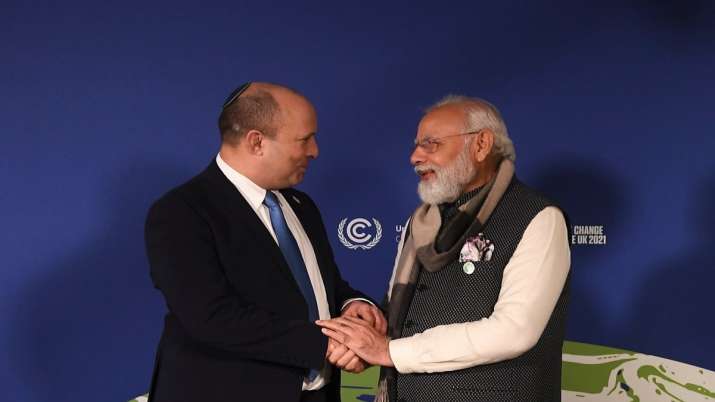 Prime Minister Narendra Modi on Tuesday met his Israeli counterpart Naftali Bennett on the sidelines of the COP26 climate summit in Glasgow and shared a light moment during their maiden formal interaction where the latter informed the Indian premier about his popularity in Israel and invited him to join his party.

Taking to Twitter, Naftali Bennett shared a video and wrote, “Excellent meeting with @NarendraModi at @COP26. Narendra, I want to thank you for your historic role in shaping the ties between our countries. Together, we can bring India-Israel relations to a whole new level and build a better and brighter future for our nations.”

In the video of the interaction shared on Twitter, the Israeli Prime minister can be heard saying to PM Modi, “you are the most popular person in Israel.”  Replying to the comment, Modi said, “thank you, thank you.”

During the meeting, the two leaders reviewed the bilateral ties besides exchanging views about expanding cooperation in areas of high-technology and innovation. Modi and Bennett’s maiden formal meeting came after their brief interaction on Monday during the climate conference.

Earlier, recalling their brief meeting on Monday, Prime Minister Modi said that the people of India deeply value their friendship with Israel.

“Enhancing friendship with Israel. Prime Ministers @narendramodi and @naftalibennett had a fruitful meeting in Glasgow. Both leaders discussed deepening various avenues of cooperation for the benefit of our citizens,” the Prime Minister’s Office tweeted.

The meeting between Modi and Bennett comes after Jaishankar, during his visit to Israel last month, extended an invitation to the Israeli premier on behalf of Modi to visit India.

According to Israeli media reports, Bennett, who became prime minister in June this year, is likely to visit India next year.

India and Israel elevated their bilateral relations to a strategic partnership during the historic visit of Prime Minister Modi to Israel in July 2017.

Since then, the relationship between the two countries has focused on expanding knowledge-based partnership, which includes collaboration in innovation and research, including boosting the ‘Make in India’ initiative.

ALSO READ: ‘No one is untouched by the wrath of climate change’: PM Modi at COP26 summit