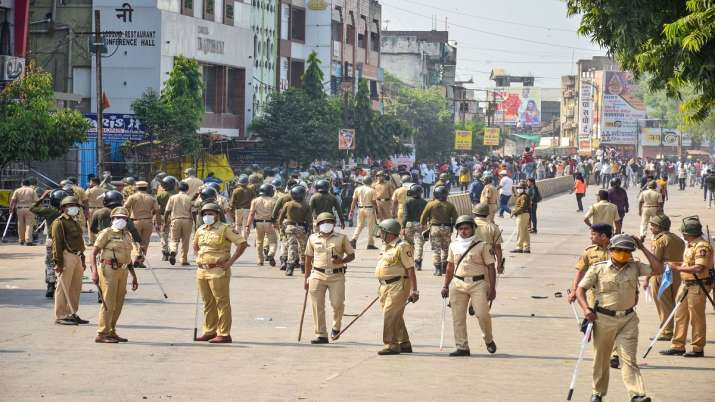 A Nationalist Congress Party (NCP) Corporator Ayaz Hulchul has been arrested by Malegaon police in connection with Friday violence.

The Maharashtra government on Saturday clamped prohibitory orders in Amravati town which was rocked by violence during a Bharatiya Janata Party-sponsored ‘bandh’ (shutdown), officials said.

The orders were issued by in-charge Police Commissioner Sandip Patil under CrPC Sec. 144 (1), (2), (3), to ward off any untoward incident.

As per the one-pager, barring medical emergencies, no person shall be permitted to come out of their homes and assembly of five or more persons is banned.

The BJP had called the bandh to protest against the violence that broke out in Nashik, Amravati and Nanded on Friday during the state-wide demonstrations and rallies by Raza Academy and other Muslim organisations.

Shortly afterwards some sections took to pelting stones at private or public vehicles, shops and establishments and the police caned the miscreants to curb the violence.

The Muslim groups’ action on Friday was to register their protest at the recent bout of communal violence in Tripura state which had repercussions, and virtually caught the Maha Vikas Aghadi government unawares.

After the violence reported from Nanded, Amravati and Malegaon (Nashik) on Friday evening, Home Minister Dilip Walse-Patil made a late-night video appeal for restraint from all groups.

“Please maintain calm… I appeal to all Hindus and Muslims brethren to maintain peace,” Walse-Patil urged, and discussed the matter along with other MVA leaders.

Appealing for peace, Leader of Opposition Devendra Fadnavis said that such reactions to incidents elsewhere have never occurred before in Maharashtra.

“This is very unfortunate… It appears to be a well-planned conspiracy as Hindu shops were set ablaze in Amravati. Even more serious is the manner in which MVA ministers are making provocative statements,” Fadnavis said.

Earlier on Saturday morning, the BJP-led shutdown saw several incidents of violence, stone-pelting which damaged many vehicles, minor incidents of arson forcing the police to resort to mild caning.

“I am closely monitoring the entire situation with the help of senior police officers and discussing with senior Opposition leaders. All those guilty would not be spared… We all must maintain social harmony and I request all to cooperate with us. I request the same to my police brethren to handle the situation cautiously and to maintain peace,” Walse-Patil said on Saturday.

Maharashtra BJP president Chandrakant Patil and Samajwadi Party’s Maharashtra unit president Abu Asim Azmi and other leaders urged the state government to ensure law and order is maintained in Amravati and condemned the violence that erupted on Friday in three towns, though the protests were peaceful in rest of the state.

(With inputs from IANS)