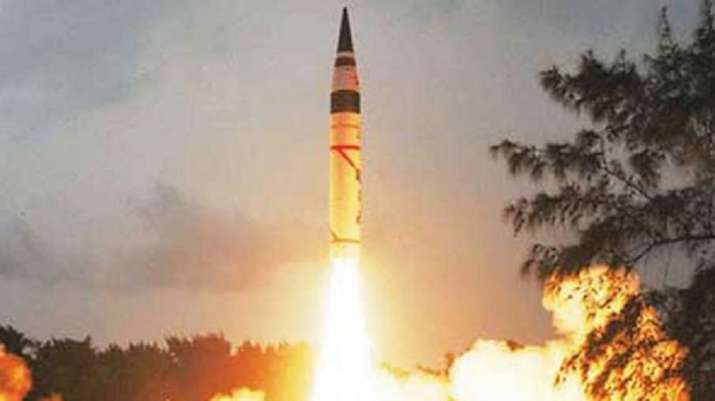 In a major boost to its military might in the midst of the eastern Ladakh row, India on Wednesday successfully test-fired surface-to-surface strategic missile Agni-5 that can strike targets at ranges up to 5,000 km with a very high degree of accuracy. The test-firing of the nuclear-capable missile was carried out around 7:50 pm from the APJ Abdul Kalam Island in Odisha, officials said.

The Agni 5 project is aimed at enhancing India’s nuclear deterrence against China which has missiles like Dongfeng-41 having ranges between 12,000-15,000 km.

“The successful test of Agni-5 is in line with India’s stated policy to have credible minimum deterrence that underpins the commitment to ‘No First Use’,” the defence ministry said in a brief statement.

The work on the Agni 5 intercontinental ballistic missile project was started over a decade ago and the missile was tested seven times before.

People familiar with the development said it was the first user trial of the missile which can bring the northernmost part of China under its striking range.

The successful test-firing of the missile, built by the Defence Research Development Organisation’s (DRDO), came amid a lingering border standoff with China in eastern Ladakh. The missile has a height of 17 metres and it is capable of carrying a 1.5-tonne warhead.

The first test of the missile was carried out in April 2012 while the previous one was conducted around three years ago.

“The missile, which uses a three-stage solid-fuelled engine, is capable of striking targets at ranges up to 5,000 kilometres with a very high degree of accuracy.,” the ministry said.

The successful test firing of the missile paves the way for its induction into the Strategic Forces Command that takes care of India’s strategic assets, the people cited above said. The Agni 1 to 4 missiles have ranges from 700 km to 3,500 km and they have already been deployed. The Agni 5 project was aimed at enhancing India’s nuclear deterrence against China.

In June, the DRDO successfully test-fired a new generation of ‘Agni’ class nuclear-capable ballistic missiles that has a range of up to 2,000 km.

Many advanced technologies including propulsion systems, innovative guidance and control mechanisms, and state-of-the-art navigation systems have been introduced in the ‘Agni Prime’ missile.

Also Read: Covaxin added to approved list of Covid vaccines for travel to Oman without quarantine