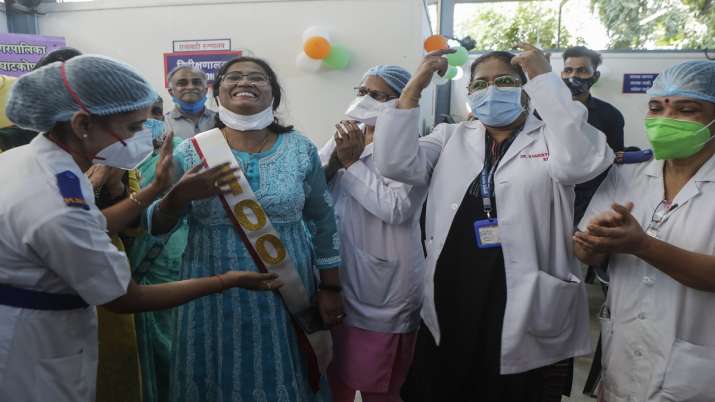 India on Thursday achieved its biggest COVID-19 vaccination milestone as the total vaccines administered in the country crosses one billion. The 100 crore vaccination feat resulted in celebrations across the country.

Prime Minister Narendra Modi hailed the landmark reached in little over nine months time since the countrywide vaccination drive was launched on January 16 as a triumph of Indian science, enterprise and collective spirit of 130 crores.

He also visited the vaccination centre at the Ram Manohar Lohia Hospital and interacted with hospital staff and some of the beneficiaries. He was accompanied by Union Health Minister Mansukh Mandaviya.

Modi said the country now has a strong protective shield of 100 crore vaccine doses to combat the biggest pandemic in 100 years. “This achievement belongs to India, every citizen of India,” he said, expressing gratitude to those engaged in the programme. Data from Co-WIN portal showed over 76 lakh doses were administered till 8.40 pm.

In a tweet, Mandaviya congratulated the country on achieving the feat, and said it was the result of the able leadership of Prime Minister Modi, whom he described as a visionary.

“Our great nation has today achieved a great accomplishment! #VaccineCentury PM @NarendraModi ji’s insightful vision has paved the way for this unprecedented record,” he said in a tweet.

The journey towards the milestone

India took 85 days to touch the 10-crore vaccination mark, 45 more days to cross the 20-crore mark and 29 more days to reach the 30-crore mark, according to the Union Health Ministry data.

The vaccination drive was rolled out on January 16 with healthcare workers getting inoculated first. Vaccination of frontline workers then started from February 2.

The next phase commenced from March 1 for people over 60 years and also those aged 45 and above with specified co-morbid conditions.


Vaccination for all people aged over 45 years from April 1. The government then decided to expand its vaccination drive by allowing all above 18 to be vaccinated from May 1.

According to Co-WIN portal data, over 71 crore vaccine doses were administered as the first dose and over 29 crore as the second dose. More than 75 per cent of India’s adult population has received at least one dose of COVID-19 vaccine, with nine states and union territories administering the first dose to all eligible people.

Over 31 per cent of the country’s around 93 crore adults have been administered both the doses, according to Health Ministry officials.

So far, all adult people in nine states and union territories — Andaman and Nicobar Islands, Chandigarh, Goa, Himachal Pradesh, Jammu and Kashmir, Lakshadweep, Sikkim, Uttarakhand and Dadra and Nagar Haveli — have received at least one dose of the vaccine.

The top five states which have administered the highest number of doses are Uttar Pradesh, Maharashtra, West Bengal, Gujarat and Madhya Pradesh. 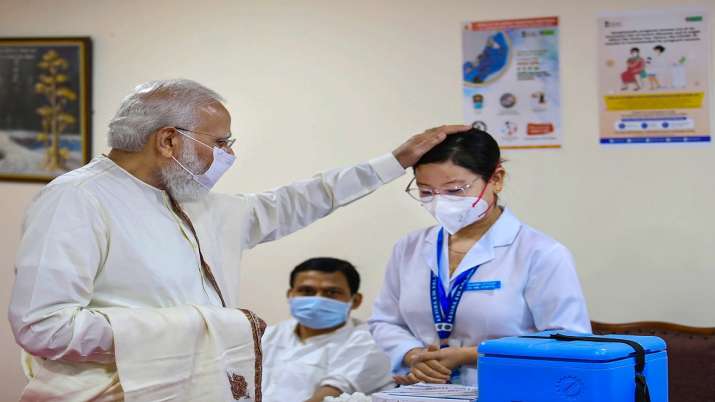 Wishes pour in from across the world

WHO Director-General Dr Tedros Adhanom Ghebreyesus congratulated Modi, scientists, health workers and citizens of India for equitable vaccine distribution, while a number of other global leaders also extended their congratulations.

US Secretary of State Antony Blinken congratulated India for the “extraordinary accomplishment” of administering one billion doses of the COVID-19 vaccine. “I applaud India’s successes in fighting COVID-19 at home and for its efforts to help end the pandemic in the Indo-Pacific region and well beyond,” he said.

Bhutan’s Prime Minister Dr Lotay Tshering said the feat is a “huge accomplishment” not just for India, but the world. “On behalf of the people of Bhutan, I congratulate India!” he tweeted. 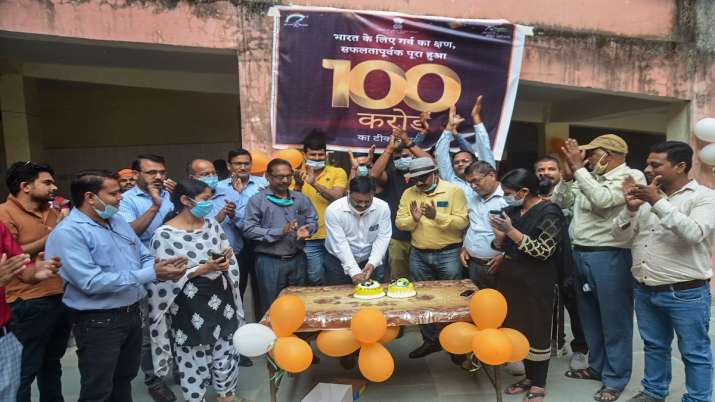 “The way forward & adjusting to the new normal while staying safe is highly dependent on a successful vaccination drive. Congratulations on reaching this milestone,” he tweeted.

In its response, the MEA said the guidance and support of the Lankan prime minister have been instrumental in driving India-Lanka relations forward.

“We hope mass vaccination drives in the 2 countries will promote travel & interactions in both directions & enhance people 2 people ties that form the bedrock of India-Lanka relations,” it tweeted.

UNICEF India also congratulated the government on reaching the milestone while welcoming strides that India has made in recent months to ramp up vaccinations.

India’s celebration of the achievement

A series of events were held to mark the milestone including launch of a song by singer Kailash Kher and an audio-visual film at the Red Fort, where the largest khadi tricolour in the country, weighing around 1,400 kg, was displayed.

SpiceJet unveiled a special livery, bearing an image of Modi and healthcare workers, on its Boeing 737 aircraft at the Delhi airport to celebrate the milestone. Mandaviya and Civil Aviation Minister Jyotiradiya Scindia were also present during the unveiling.

Besides that, some mobile networks caller tunes mentioning completion of 100 crore doses were also introduced. The Archaeological Survey of India lit up 100 of its heritage monuments in colours of the tricolour to mark the milestone as a tribute to health professionals, frontline workers, scientists, vaccine manufacturers and the citizens of the country who bravely fought the pandemic.

All ships at major ports hooted and Delhi Metro Rail Corporation (DMRC) made announcements through its public address systems and displayed messages on panels in trains and at stations.

Also, banners were put up at some central government hospitals and refreshments were distributed among the hospital staff and beneficiaries who had come for vaccination to celebrate the milestone. AIIMS Resident Doctors Association along with other associations took out a march holding national flags and singing patriotic songs at the campus and celebrated the occasion.

AIIMS Director Randeep Guleria said many people were sceptical when the vaccination drive began in January but “in little over nine months time, we achieved the target of administering 100 crore doses. It is a proud day for India”. He said the target now is to administer first dose to all adult population by end of the year and appealed those who have taken the first dose to come forward to take the second shot as per the schedule and get fully vaccinated.

NITI Aayog member (Health) Dr V K Paul said efforts have to be made to inoculate those who have not taken the first dose while it has to be ensured that those who have taken one dose take the second dose too.