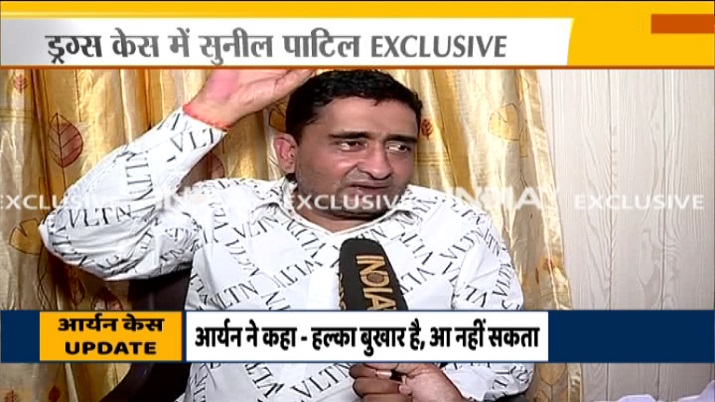 In yet another twist to the Cordelia Cruiser raid, Sunil Patil on Sunday denied the reports claiming that he is the ‘mastermind’ behind the cruise drug bust conspiracy case in which Aryan Khan, son of actor Shah Rukh Khan, was arrested last month. His statement comes a day after Bharatiya Janata Party (BJP) leader Mohit Bharatiya alias Kamboj claimed that Patil is the alleged “mastermind” behind the sensational case.

Addressing a media conference on Saturday, Bharatiya Janata Party (BJP) leader Mohit Bharatiya alias Kamboj said, “Sunil Patil, who hails from Dhule, and has been associated with the Nationalist Congress Party (NCP) for over two decades, was the brain behind the case.”

Reacting to the development, Sunil Patil said, “I am not the mastermind nor do I have anything to do with this case.”

According to Mohit Kamboj, Patil, who is a friend of former state minister Anil Deshmukh’s son Hrishikesh Deshmukh, boasted of his strong relations with the NCP leaders and how Anil Deshmukh had once allegedly met drug peddler, Chinku Pathan, an aide of the mafia don Dawood Ibrahim Kaskar, at a government guest house during the lockdown.

Sunil Patil has no relations with NCP, have never seen him: Nawab Malik

Maharashtra minister and Nationalist Congress Party (NCP) leader Nawab Malik rubbished Bharatiya’s claims, terming it as an unsuccessful attempt “by a member of Wankhede’s private army to misguide and divert attention from the truth”. He also denied knowing Sunil Patil.

Elaborating, Bharatiya claimed that Patil is also linked with the others whose names have cropped up in recent weeks like Sam D’Souza, Kiran Gosavi, Prabhakar Sail and Manish Bhanushali and “they work as a syndicate”.

In a statement, Nawab Malik said, “I never met Sunil Patil before nor he is a National Congress party worker. Since yesterday a lot of photos have been going viral of Sunil Patil and Manish Bhanushali with different political leaders.”

Patil is a fraud and is a player in Sameer Wankhede’s private army, he further said.

The NCP leader said:  “When I held a press conference on October 6, Patil called me after two hours of the conference and said that he wants to provide more evidence in this particular case. I would him to come to Mumbai and talk face to face but he never came. He again called me during my second press conference, but there was again no sign of him.

“Kashiff Khan forced our minister Aslam Shaikh to come to the party and was also planning to bring children of various ministers of our govt to the party. If Aslam Shaikh had gone there it would have been Udta Maharashtra after Udta Punjab,” he said.

Malik has alleged that Aryan Khan did not purchase the ticket for the Cordelia Cruise ship party and claimed that NCB official Sameer Wankhede laid the trap for Bollywood superstar Shah Rukh Khan’s son.

“Aryan Khan didn’t purchase the ticket for the cruise party. It was Pratik Gaba and Amir Furniturewala who brought him there”, he tweeted.

“A paper roll that was a brand of Fashion TV was seized in the case & it is being said the drug is consumed through that roll. Why was the owner not arrested? The owner of this brand is Kashiff Khan. He is a partner of Wankhede and was present at the party,” he added.

Malik said that Mohit Kamboj is the mastermind and partner of NCB’s Zonal Director Sameer Wankhede in demanding ransom.

While addressing a press conference earlier today, Malik had alleged that there exists a connection between the Zonal Director of Narcotics Control Bureau (NCB) Mumbai unit and Bharatiya Janata Party (BJP) leaders. “We think there might have been some talks between Sameer Wankhede and BJP leaders,” Malik said.

“Mohit Kamboj and Sameer Wankhede met outside Oshiwara graveyard on October 7. Wankhede panicked and complained to the police that they were being chased. they were lucky that the CCTV cameras were not working so they were not caught in the footage, Malik said.

“Vijay Pagare told me, they were staying in the Lalit hotel for the last 7 months. Manish and Vilas Bhanushali, Sam D’Souza used to come there. Girls also used to come there, the drug was consumed there and money was also exchanged there,” he said.