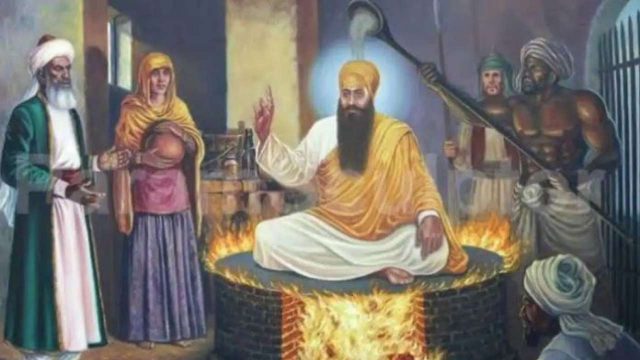 Guru Arjan Dev, the fifth guru of Sikh, was the first of the two gurus to be martyred in the Sikh faith. He is known for compiling the first copy of the Sikh scripture called Adi Granth, now known as Guru Granth Sahib. First Guru to be born in the Sikh family, he completed the construction of Darbar Sahib in Amritsar, compiled the hymns of previous Gurus and other saints into Adi Granth and installed it in the Harimandir Sahib.

Born in 1563 in Goindval, Tarn Taran district during the reign of the Mughal Empire, Guru Arjan Dev was martyred in Lahore in 1606.

Guru Arjan Dev Ji is also said to have founded the cities of Tarn Taran Sahib, Kartarpur near Jalandhar in Punjab. The Guru also went on to add his literary works to the Sikh scriptures. For example, the fifth hymn in the Kirtan Sohla (also called the ‘Song of Praise’ or the night prayers) is written by him. And last but not least, he is also said to have written the Sukhmani Sahib or the ‘Prayer of Peace’.

In the year 1606, he was captured by Mughal Emperor Jahangir and was imprisoned in Lahore Fort due to his increasing influence in Northern India and the fast spread of Sikhism. It is also believed that Guru also blessed Jahangir’s rebellious son Khusrau. It is also said that his conversions to Sikhism threatened the orthodox Muslim clergy .

The Sikhs observe the martyrdom of the Sikh Guru Arjan each year on June 16. His martyrdom is remembered as Shaheedi Divas of Guru Arjan.

On this day, people often organise events where they read Sri Guru Granth Sahib and distribute langar. This year due to the outbreak of COVID-19, no big event has been organised.

Guru Arjan Dev’s son, Hargobind Singh, became the sixth guru of the Sikhs after him.

In 1588 AD, Arjan Dev had laid the foundation of the Golden Temple and also prepared the map of the temple. The doors of the temple on all sides signify the acceptance of all 4 castes and religions. “Guru Arjan Dev Ji”

Guru Arjan Dev expanded the Sikh scripture written by the previous Gurus and placed a copy of the Adi Granth in the completed Harimandir Sahib temple on August 16, 1604, and appointed Baba Buddha as the first Granthi. He also contributed more than 2,000 hymns himself, which was more than a third and the largest collection of hymns in the Guru Granth Sahib. He was also the author of the well known Sukhmani Sahib Bani.