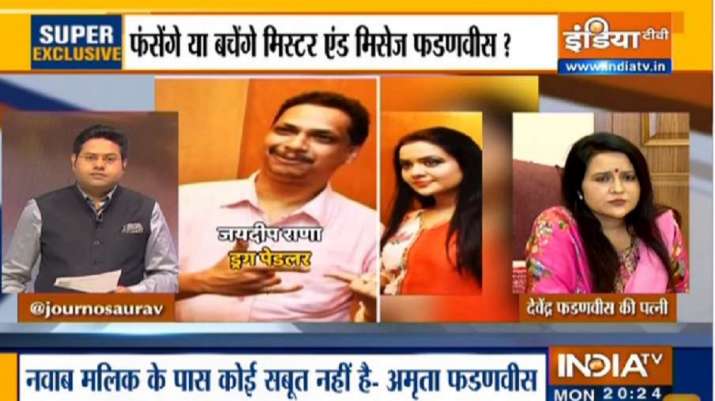 Explaining the roots of the picture of herself and drug peddler Jaideep Rana, the former CM’s wife said, “It was not written on his forehead that he was a drug peddler. I had no idea. If he did, I would’ve asked him to go away.”

Fadnavis further explained that she was then working with an NGO that aimed to save the rivers of Mumbai and that she had made an album in support of the movement with the team. She further added that the team was always asking for pictures at the end of the shoot, in which she had taken a picture with the now-jailed drug peddler Jaideep Rana.

Slamming Nawab Malik, Amruta said, “Nawab has been strategically making false allegations against me and Devendra. When he was in trouble, he called us multiple times seeking for help,” adding that Nawab Malik had no proof or witnesses to support his allegations.

Asserting that she is not a politician, Amruta said she is a social activist.

“Sachin Gupta and Jaideep Rana, the director and assistant made a song on rejuvenation of rivers for Isha Foundation and the entire Bollywood sang for it. I and even Devendra ji lent our voice,” she said.

“The River March NGO liked their work for a song exclusively for Mumbai. Sachin Gupta said he will do it for free. Everyone did it for free. Even the dabbawalas and the Koli community participated in it,” Armuta told reporters.

Earlier in the day, in a series of tweets, Malik, who has been targeting the Narcotics Control Bureau (NCB) after it raided a cruise ship last month and claimed to have seized drugs onboard, posted a photograph of Amruta Fadnavis with an alleged drug peddler.

He also posted a similar photograph of Devendra Fadnavis with the alleged drug dealer.

“Let’s have a discussion of links between BJP and drug peddler,” Malik tweeted, referring to the photograph of Amruta Fadnavis with the person. In another tweet, the minister said the person was Jaideep Rana.

Amruta said after she moved to Mumbai, she came in touch with several NGOs including the River March and started working for the rejuvenation of Poisar, Mithi, Dahisar and Oshiwara rivers.

“I visited every river — Dahisar, Mithi, Oshiwara and Poisar and saw the roadblocks. I supported the River March and public movement,” she said. Amruta said she pursued the matter with Fadnavis “not as a wife, but as a social activist”.

“Convert the Bigde Nawab energy into Sudhre Nawab. Only this can take Maharashtra ahead. You have to ask these questions to this ‘bigde’ Nawab or his boss or his super boss,” she said hitting out at Malik.

“Whatever charges you level against me, and on Deven (Fadnavis), we are two separate identities. I am a thorough social worker, a banker and a singer. I maintain that identity. If anyone attacks me, I will not leave them. Be a man and don’t target Devendra ji through me,” she added.

Fadnavis, however, said Malik’s tweet reflected his mentality and claimed that he will burst a bomb after Diwali by making revelations about the minister’s underworld links, which he will also share with NCP president Sharad Pawar.

The Leader of the Opposition in the Assembly also said it was the creative team of River March that roped in people, including Rana, for making the song.

ALSO READ | ‘Have evidence of Nawab Malik’s relations with underworld’: Fadnavis in retort to NCP leader